Food is a potent way of evoking personal memory and memories of migration, family life and historical events. We can all recall the taste of holidays, of our school lunches, of favourite family meals and these form part of the texture of our autobiographical memory. A taste or smell can transport us to a past time or place. 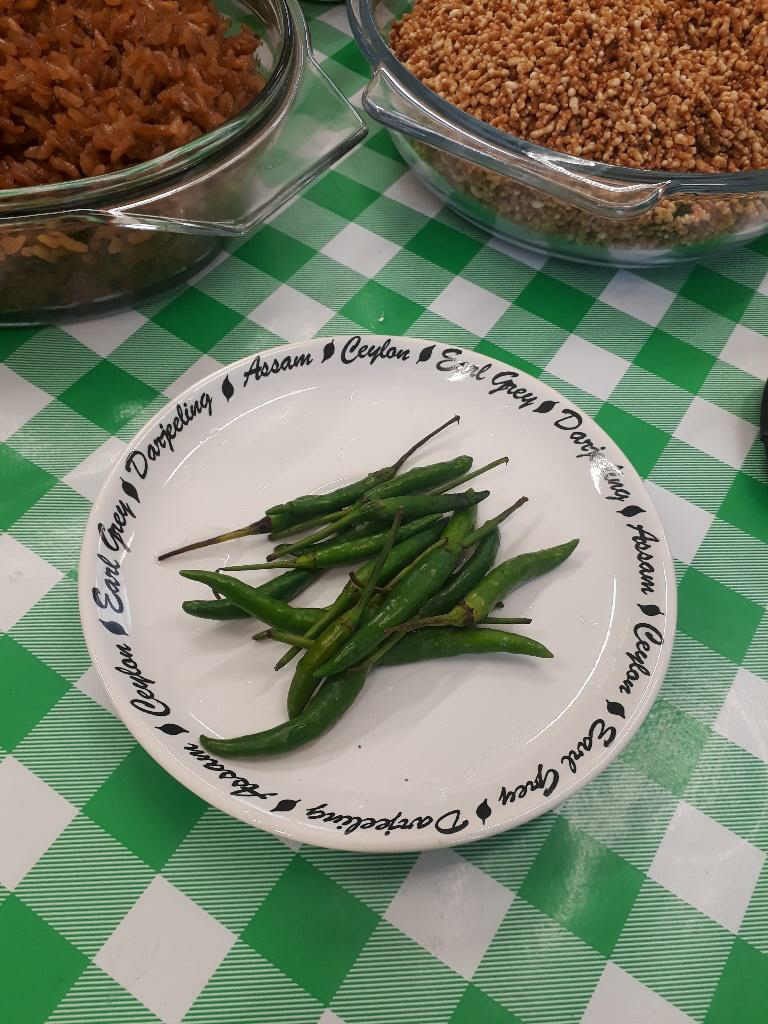 As food can evoke memories so powerfully, the Migrant Memory and Postcolonial Imagination project (MMPI) ran a series of food and memory cooking sessions in 2019 with the Bangladeshi women’s ‘Thursday group’ (part of the Positive Minds Project) and with the Improving Lives Men’s project both run by Equality Action. These sessions took place in Loughborough, a market town in the East Midlands, near Leicester.

The aim of the project with the two groups was to explore the role of food in evoking memories of Bangladesh and in articulating British Bangladeshi community and identity through cooking and eating. We were particularly lucky to work with these two groups as many members of the women’s group had extensive experience of home cooking, while the men’s group members had extensive experience working in ‘Indian’ Bangladeshi restaurants in the UK and in Italy. With a broad range of knowledge and experience of food and cooking among the groups, the activity provided lively discussion around food and memories.

The workshops took place in community halls, which became filled with the sounds and aromas of the Bangladeshi (and a few Italian) dishes being prepared. In discussion with the groups, each session was themed so the dish would reflect memories of particular times and places. 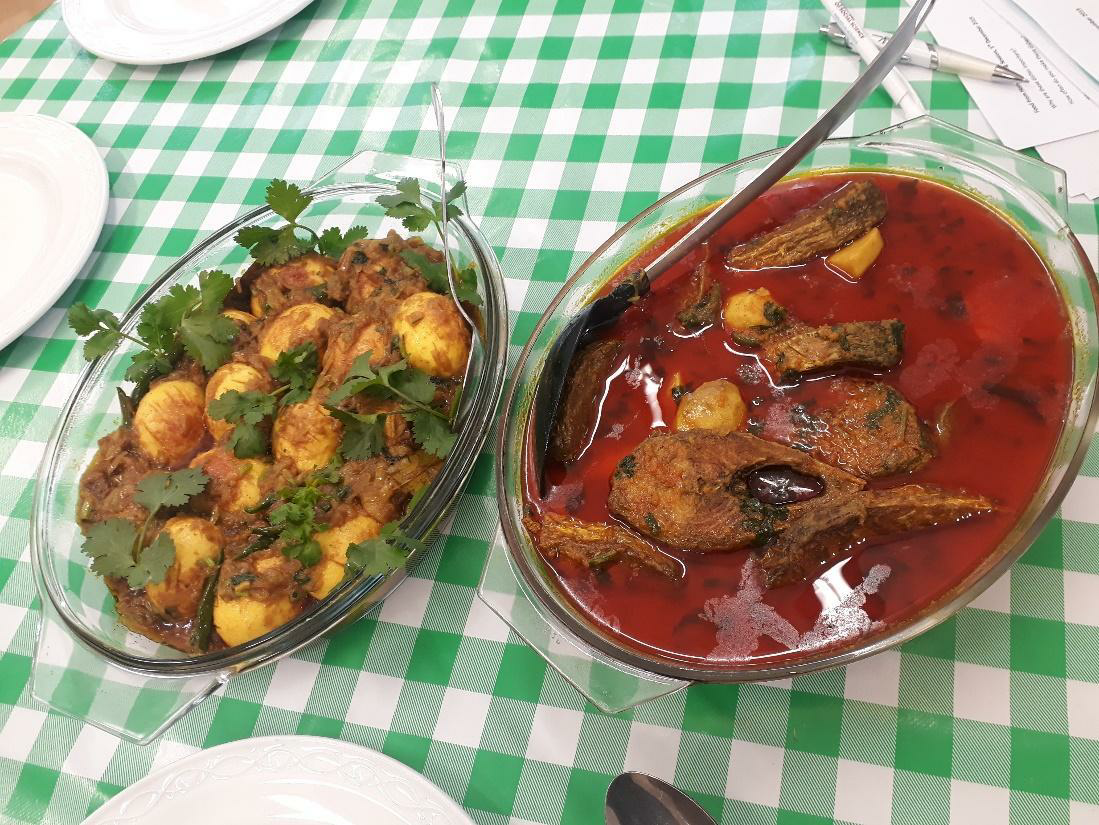 While the groups took it in turn to lead each session, we had discussions about the dishes being made, why they were chosen in relation to each theme, what memories they brought back and whether they would be passed on to younger generations. Once the dishes were ready, we spoke about the taste of the dish and the memories it evoked.

Themes included ‘forgotten dishes’, where the sweet and sour khatta soup was made;  ‘food from childhood’ in which biryani and the bean and rice koroi baat were made; and food from ‘home’ which included egg bhuna, hilsa fish and rice. We also had a session that celebrated Language Day in which we treated ourselves to some (complicated) Bangladeshi snacks from a local caterer!

As the sessions took place outside the home, among friends within the group, both the women’s and men’s group were repeatedly reminded of tufabat – the practice of young people gathering together outdoors to cook and eat together in Bangladesh. A member of the women’s group remembered how she and her friends would meet after school exams in Sylhet, each one bringing some of the ingredients to collectively make a meal. One of the members of the men’s group, remembered when he first arrived in Loughborough as a teenager and would have tufabat with some of his friends in Garendon Park on the outskirts of the town. 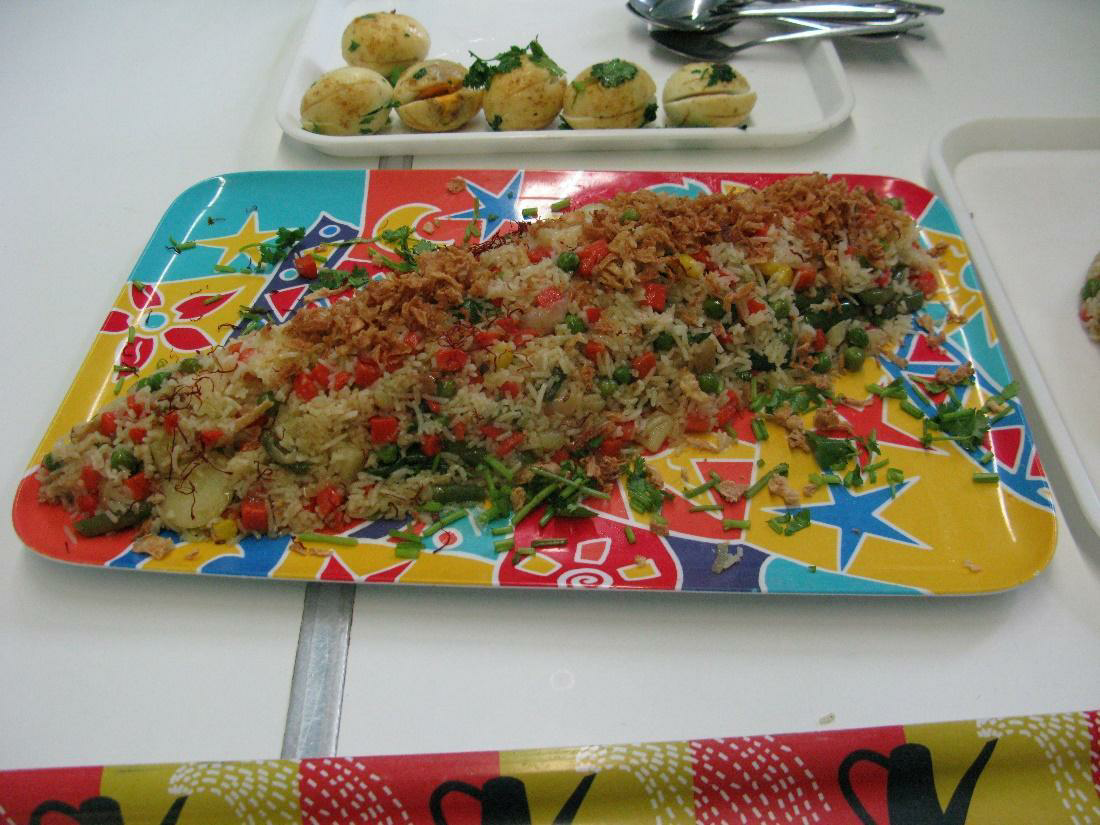 The sessions also brought up collective memories of the famines Bengal has suffered, such as the 1943 and the 1974 post-independence famines, and the lack of food for those fleeing during the liberation war.  These topics were considered in relation to the resourcefulness of Bangladeshi cooks, such as making pakoras from jackfruit leaves.

The food and memory sessions evoked personal and cultural memories. Throughout the sessions, our participants maintained that food strongly connects them and their families to Bangladesh as ‘Britishness’ becomes increasingly prevalent as an identity across the generations. Perhaps this is best summed up in the discussion of the significance of hilsa and other fish in the conversations about Bangladeshi-ness. The saying “baate masse Bangali (rice and fish makes you Bengali)” was often repeated in response to questions about the significance of food and food practices in Bangladeshi communities. This beautifully illustrates the centrality of food in connecting experiences, places, and identities in the stories we tell about our lives.

You can follow MMPI’s journey on Twitter and find more information about their memory curation projects by clicking on each of the project posters below: